Coming from a family of engineers, Mary Sullivan knew that becoming an engineer was inevitable for her.

Sullivan always liked math and solving problems, but she wasn’t sure which branch of engineering she would select.

Now, five years later, she has been selected as a speaker for Herbert Wertheim College of Engineering’s Spring 2019 Recognition Ceremony.

“As a freshman, I never ever imagined that I would be speaking at my graduation. Quite honestly, I am ending my year at UF on the highest note possible,” Sullivan said. “I am grateful for the chance to publicly thank the Herbert Wertheim College of Engineering which has provided me with so many opportunities.”

During her freshman year, Sullivan joined the University of Florida’s American Society of Civil Engineers (ASCE) student chapter and its Concrete Canoe Team, which shaped her path to becoming a civil engineer.

“Everyone in ASCE was welcoming, and now they are my closest friends,” Sullivan said. “The team is 100% the thing that changed my life.” 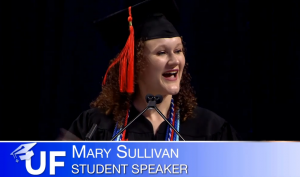 Sullivan began as a paddler for the Concrete Canoe Team and participated in the annual ASCE Southeast Regional Conference in her first two years. During the conference, ASCE student chapters from various universities compete in design and skill challenges to put their engineering knowledge to the test.

“I went to my second conference and then the next day, I changed my major to civil engineering,” Sullivan said.

After switching her major, Sullivan took on the unofficial title as ASCE Southeast Regional Conference Director in March 2017 and UF ASCE Student Chapter President in Fall 2018.

“Being involved was the best way to gather experiences and learn. It has changed the way I run my life, from organizing my day-to-day to interacting with others,” Sullivan said. “Different pressures come with each position, but they’ve all helped me become a stronger leader.”

After graduation, she will pursue a career in water resources, which specializes in subdivision design and urban planning.

“I want to be able to take all of the technical knowledge that I’ve learned and create a fun design in parks and recreation,” Sullivan said.