The Herbert Wertheim College of Engineering strives to educate the New Engineer who will transform the society of the future. These students express the attributes of the Gator Engineer – creativity, leadership, integrity, professional excellence and service to the global community. Luis Gonzalez has exemplified the Gator Engineer in so many ways during his time at UF and in the U.S.

A memorable story in Luis’ own words

My name is Luis Gonzalez. I am a 24-year-old civil engineer who arrived in the United States in 2013 as an 18-year-old political refugee from Cuba. When I left my country, I had not decided what career to study. I only knew that I wanted to be an engineer. I did not feel a vocation towards any particular engineering specialty, but I was impressed by the great constructions and infrastructure that I began to see upon my arrival in the U.S.

At that moment, I felt that I wanted to be responsible for such a view, so I decided to become a civil engineer. Initially, I thought my goal was almost impossible, given my immigrant status, economic situation, and lack of language; but I started to investigate and discovered the options that existed to fulfill my dreams.

I started my studies at Miami Dade College, where I began to understand the functioning of a new educational system, while, at the same time, learning English. During my enrollment there, I joined several organizations, including Phi Theta Kappa Honor Society, the National Society of Collegiate Scholars, and Golden Key International Honour Society. In addition, I became part of a research team that analyzed the spread of Zika virus, applying differential equations to the analysis.

My first college experience was very beneficial, because balancing my student life with a full-time job, while inserting myself in a new society, was a challenge; hence, every small achievement had a special significance. 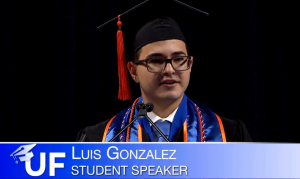 Another challenge I faced was to combine my professional field with my school experience. Initially, I worked as an inspector of materials at Reliant Cargo Services, where I acquired a great sense of responsibility and work conscience. I was able to apply these traits in my later employment as an accountant at Interservices MIA.

In December 2016, I completed my Associate of Arts degree at Miami Dade College, graduating with the highest honors, and gained acceptance to the University of Florida.

At the beginning of 2017, I undertook a new trip, this time to the University of Florida (UF), a place I never thought I would reach. During these last two years, I have managed to successfully pass all my courses, taking an average of five classes (18 credits) per term. I have overcome my biggest fears and have secured a position as Field Engineer with a great company, PCL Construction.

One of the most interesting things I was able to work on at the College was a project where I designed a recycling facility to produce clean demolition waste as a precursor for a marketable recycling material. The facility had to be able to produce up to 1,000 tons of debris per day with a capacity to salvage 90% of the incoming materials. The project became the basis of my honors thesis.

One particular contribution I have been able to make to help other students seeking to attend UF, has been leading university tours for Spanish-speaking groups. I have been able to help more than 25 families better understand all the things UF has to offer while they were seeing all the great buildings on campus.

My time here at the University of Florida has been my greatest experience so far. I have become a better person and a better engineer, ready to be a factor of change in society.